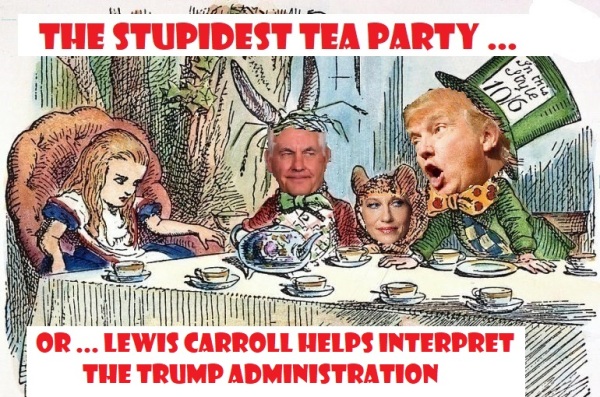 (with apologies to Lewis Carroll … and no one else)

EXPLANATORY NOTE: Forty-five years ago, just as Watergate was slowly but surely evolving from a two-bit burglary story to a full-blown national scandal, Mad Magazine published a brilliant piece of satire: “Malice in Wonderland, or Watergate Through the Looking Glass as predicted by Lewis Carroll.” 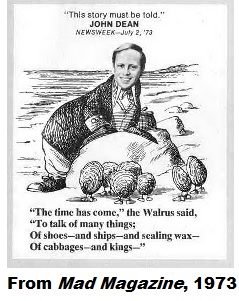 The article juxtaposed statements by the likes of President Nixon, John Dean, H.R. Haldeman, and John Erlichman with quotations from Carroll’s two nonsense masterpieces, Alice’s Adventures in Wonderland and Through the Looking- Glass and What Alice Found There (published, respectively, in 1865 and 1871.)

Which brings us to 2018. President Trump assures us he only hires the best people, with the best ideas. But sometimes the things he and his people say defy conventional logic.

Calling upon the two Alice books and Carroll’s The Hunting of the Snark, I’ve put together the following bit of satire. It’s my tribute to the original Mad piece and my attempt to see if Carroll’s upside-down logic can be used to decipher the words of Donald J. Trump and his revolving retinue of rogues and rascals.

“They’ve a temper, some of them–particularly verbs: they’re the proudest — adjectives you can do anything with, but not verbs — however I can manage the whole lot of them!”
Humpty Dumpty, Through the Looking Glass

“Beware the Jabberwock, my son! The jaws that bite, the claws that catch! Beware the Jubjub bird, and shun the frumious Bandersnatch!”
“Jabberwocky,” Through the Looking Glass

“Look, having nuclear — my uncle was a great professor and scientist and engineer, Dr. John Trump at MIT; good genes, very good genes, OK, very smart, the Wharton School of Finance, very good, very smart — you know, if you’re a conservative Republican, if I were a liberal, if, like, OK, if I ran as a liberal Democrat, they would say I’m one of the smartest people anywhere in the world … nuclear is powerful; my uncle explained that to me many, many years ago, the power and that was 35 years ago; he would explain the power of what’s going to happen and he was right — who would have thought?”
Donald J. Trump, July 19, 2016

Alice felt dreadfully puzzled. The Hatter’s remark seemed to have no sort of meaning in it, and yet it was certainly English. “I don’t quite understand you,” she said, as politely as she could.
Alice’s Adventures in Wonderland

“What I tell you three times is true.”
The Bellman, The Hunting of the Snark

“You should learn not to make personal remarks,” Alice said with some severity. “It’s very rude.”
Alice’s Adventures in Wonderland

“Why, sometimes I’ve believed as many as six impossible things before breakfast.”
The White Queen, Through the Looking Glass

“I know what you’re thinking about,” said Tweedledum. “But it isn’t so, nohow,”
“Contrariwise,” continued Tweedledee, “if it was so, it might be; and if it were so, it would be; but as it isn’t, it ain’t.”
Through the Looking Glass

ON THE WORK ETHIC

“This is more work than in my previous life. I thought it would be easier.”
President Trump, April 27, 2017

“It was much pleasanter at home, when one wasn’t always growing larger and smaller, and being ordered about by mice and rabbits. I almost wish I hadn’t gone down the rabbit-hole — and yet — and yet — ”
Alice, Alice’s Adventures in Wonderland

“Despite the constant negative press covfefe …”
Unexplained tweet by President Trump, May 31, 2017
“I think the president and a small group of people know exactly what he meant.”
Sean Spicer, later that day

“When I use a word,” Humpty Dumpty said in a rather scornful tone, “it means just what I choose it to mean — neither more nor less.”
Through the Looking Glass

The miserable Hatter dropped his teacup and bread-and-butter, and went down on one knee. ‘I’m a poor man, your Majesty,’ he began.
‘You’re a very poor speaker,’ said the King.
Alice’s Adventures in Wonderland

“We cannot keep FEMA, the Military and the First Responders, who have been amazing under the most difficult circumstances, in P.R. (Puerto Rico) forever!”
President Trump, October 12, 2017

“Take some more tea,” the March Hare said to Alice, very earnestly.
“I’ve had nothing yet,” Alice replied in an offended tone, “so I can’t take more.”
“You mean you can’t take less,” said the Hatter: “it’s very easy to take more than nothing.”
Alice’s Adventures in Wonderland

“This is an intense place, as is every White House. And it’s not abnormal that you would have people come and go.”
Sarah Sanders, White House Press Secretary, March 7, 2018

“I want a clean cup,” interrupted the Hatter: “Let’s all move one place on.”
Alice’s Adventures in Wonderland

“I’ll now return to private life, to private citizen as a proud American, proud of the opportunity I’ve had to serve my country.”
Rex Tillerson, March 12, 2018, after being fired as Trump’s Secretary of State

“At any rate I’ll never go there again! It’s the stupidest tea-party I ever was at in all my life!”
Alice, Alice’s Adventures in Wonderland

“The sentence should have been, ‘I don’t see any reason why it wouldn’t, or why it wouldn’t be Russia’ instead of ‘why it would.’”
President Trump, July 17, 2018, correcting an earlier statement about Russian interference he made while standing alongside Vladimir Putin in Helsinki

“The cause of lightning,” Alice said very decidedly, for she felt quite certain about this, “is the thunder — no, no!” she hastily corrected herself. “I meant the other way.”
“It’s too late to correct it,” said the Red Queen: “When you’ve once said a thing, that fixes it, and you must take the consequences.”
Through the Looking Glass

“He’s gone off the rails. We’re in Crazytown. I don’t even know why any of us are here. This is the worst job I’ve ever had.”
John F. Kelly, White House Chief of Staff, quoted in “Fear: Trump in the White House” by Bob Woodward

“But I don’t want to go among mad people,” Alice remarked.
“Oh, you can’t help that,” said the Cat: “We’re all mad here.”
Alice’s Adventures in Wonderland

“I know you’re not thinking. You never do.”
President Trump to Cecilia Vega, ABC News, October 1, 2018

‘Really, now you ask me,’ said Alice, very much confused, ‘I don’t think—’
‘Then you shouldn’t talk,’ said the Hatter.
Alice’s Adventures in Wonderland

‘If it had grown up,’ she said to herself, ‘it would have made a dreadfully ugly child: but it makes rather a handsome pig, I think.’
Alice reflecting on a baby turned into a pig in Alice’s Adventures in Wonderland