Thanks to our students and friends who came out to support our special event last Friday, Oct. 18! 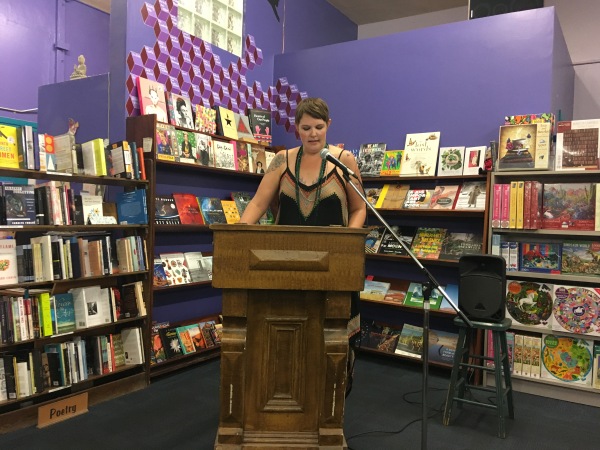 Our teachers at The Writers Studio Tucson had a chance to read from their creative work at a public reading held at Antigone Books on Fourth Avenue here in Tucson.

It was called UNREAL, and gave our teachers, Lela Scott MacNeil, Richard Leis, Donna Aversa, Reneé Bibby and myself a chance to read selections of poetry and prose that focus on the unusual, the dark, and the unreal.

This was the program:

We had a great turnout who came to hear our work and browse at Tucson’s most celebrated independent bookstore.

Many thanks to Antigone Books for being such a gracious and enthusiastic host, and making us and our guests feel at home. We’re looking forward to more events like it.

Join us on Oct. 18 for a public reading event, cohosted by Antigone Books and The Writers Studio. Teachers from the Tucson branch of The Writers Studio — Lela Scott MacNeil, Richard Leis, Donna Aversa, Reneé Bibby and myself — will read selections of poetry and prose that focus on the unusual, the dark, and the unreal.

No RSVP or admission fee is required. 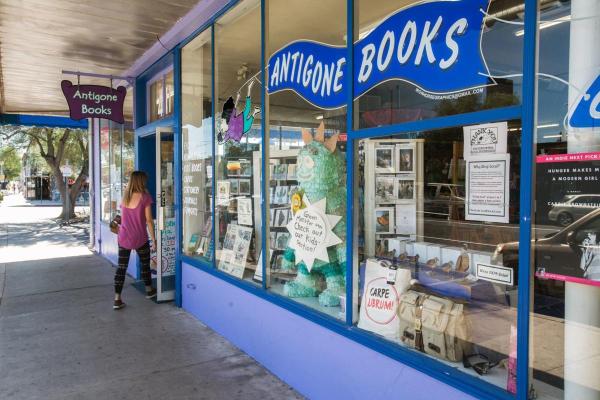 At The Writers Studio Tucson, we pride ourselves on being active participants in Tucson’s thriving literary community. Please join us, and patronize Antigone Books, one of the finest independent bookstores in the country. Visit their web site and sign up for their newsletter.

For more information on The Writers Studio, click here.

When Reality Doesn’t Cut It, UNREAL Is Our Best Friend!

I’m pleased to announce I’ve been asked to assume a new role at the Tucson branch of Writers Studio. In addition to continuing to be a teacher on the intermediate level, I’ll be serving as assistant director and working closely with branch director Reneé Bibby.

Here’s some info about the program and its philosophy, from our web site at writerstudio.com:

“The Writers Studio, founded in 1987 by Pulitzer Prize winning poet Philip Schultz, offers ongoing writing workshops — both on site and online — designed to help students discover and nurture their own voices. We welcome students at all stages, from those who have only dreamed of writing fiction or poetry to those with MFAs hungry for additional serious, ongoing instruction. Students provide the desire to write and the willingness to learn, and we provide the structure, the technical know-how, the professional feedback and the friendly community to enable them to reach their full potential.”

Janelle Drumwright, who has done an amazing job as Tucson branch assistant director for years, is relocating to another city. I hope I can carry on in her spirit and continue to bring the Writer Studio discipline and devotion to craft to students looking to expand and improve their skills. I’ll also be involved in outreach to potential students and planning of special events.

I started as a student in the program, and its emphasis on craft and the importance of creating a distinctive persona narrator for every piece of writing has been extremely helpful to me. It jump-started me after a long period of non-writing and put me on the road to getting work published. I can definitely attest to the program’s effectiveness.

New classes will be starting in January. Writers of all experience levels are welcome. Online classes are available as well as our in-person classes here in Tucson. Feel free to send me any questions about the program at philivory@writerstudio.com.

My good friend and fellow Tucson writer Alice Hatcher had her debut novel published today, The Wonder That Was Ours, and I couldn’t be more excited. Congratulations, Alice!

I’m eager to get my copy, because Alice is an awesome writer, who combines a sense of history and social awareness with wry humor and an ability to create compelling characters who are flawed but deeply human.

If you’re in Tucson, come out this weekend to see Alice read from her novel and take questions at Barnes and Noble at 5130 E. Broadway at 2 PM on Saturday, Sept. 8.

The Wonder That Was Ours won Dzanc Books’ 2017 Prize for Fiction and can now be ordered through Amazon.

Adrienne Celt, author of Invitation to a Bonfire and The Daughters, says: “Hatcher’s unique narrators offer a bird’s-eye view of history, with all the glory and devastation that entails: an ambitious experiment that ends in an achingly compassionate achievement. This book is funny, warm, and piercingly intelligent―and it will probably break your heart.”

For more on Alice’s work, check out http://www.alice-hatcher.com.

Be sure to come out and meet her on Saturday. I’ll see you there!

My thanks to my friends at A

rizona Mystery Writers for inviting me on April 14 to deliver a reprise of the “Craft of Dark Fiction” lecture I gave for Writers Studio last December. My friend Bill Adams is a longtime member and accomplished writer who initially approached me about repeating this lecture for his group. My thanks to him and also to the group’s workshop chair Kay Lesh who made the arrangements with me.  Thanks also to another good friend and outstanding writer, Alice Hatcher, for helping with the audiovisual aspect of my lecture.

The lunch was tasty, the meeting was fun and the group was attentive and appreciative. I was speaking about horror fiction, which often intersects with mystery, although the two genres can also seem like two very different worlds.

Just for fun, I created and handed out the flyer below, a personal list but one that name checks examples of short writing in the dark fiction field that have impressed and influenced me. Check it out. 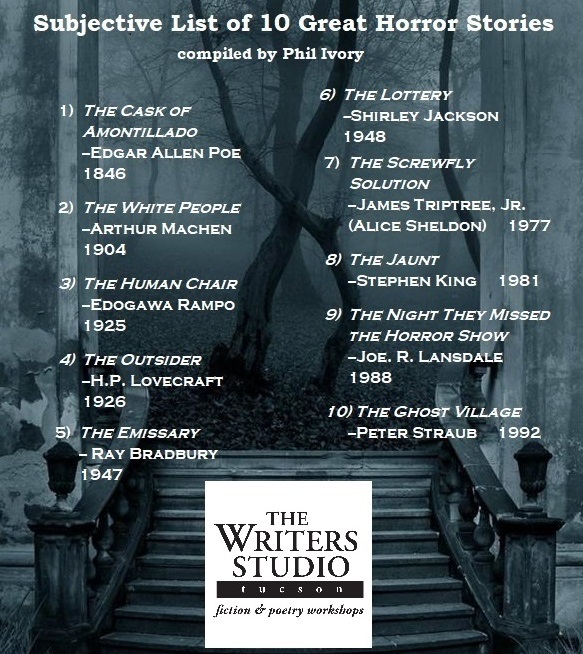 Calling all Tucson-area writers and devotees of the scary and macabre! Come out and hear me, Phil Ivory, deliver a special free lecture at 2:30 on December 9, 2017 at the Himmel Park Library here in Tucson. It’s part of the Writers Studio lecture series. It should be fun, inspirational and a little bit scary! 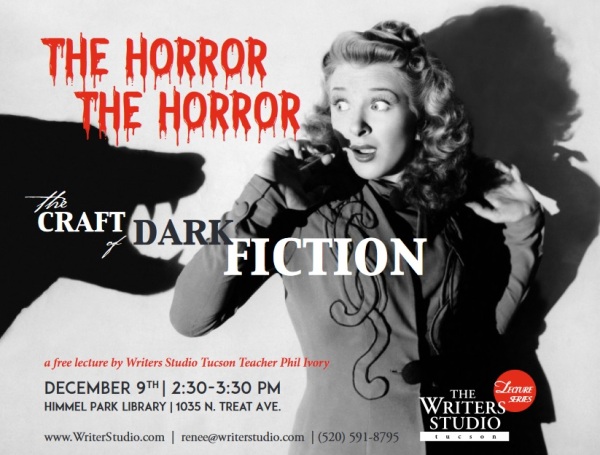 From William Faulkner to Shirley Jackson to Margaret Atwood, writers have achieved memorable effects by putting characters in extreme situations and evoking sensations of fear, dread, awe and horror. In this Writers Studio lecture, we’ll look at horror not as something confined to the macabre shelf but as an emotion that will add power and resonance to any material regardless of genre. We’ll talk about using description to evoke a dark and lingering mood. Crafting the best narrator to evoke singular emotional effects. Laying groundwork for readers to have a powerful emotional experience while never telling them what to feel.

So take a writing journey to the dark side, and come back stronger than you were before.

And while you’re at it, why not sign up for one of our upcoming Writers Studio Winter classes?  Show the world how scarily creative you really are. 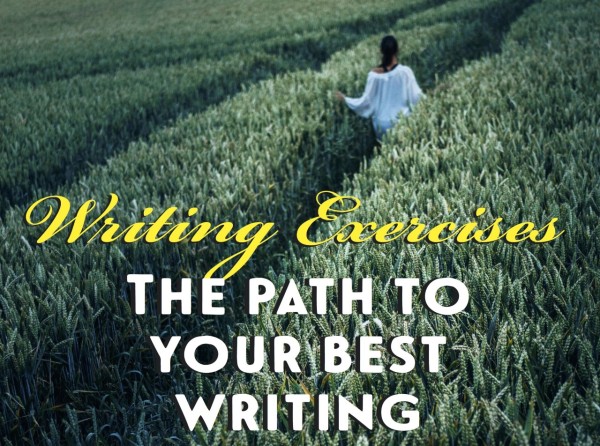 Check out the latest in a series of special free lectures from Writers Studio. Join us for an inspiring talk by Writers Studio teacher Frances Lynch on the value of using writing exercises to improve your craft.

WHAT: Free Lecture: Writing Exercises — The Path To Your Best Writing

Hope to see you there!

Also, new classes start at the Writers Studio here in Tucson in only a few weeks. Sign up for a workshop class and put exercises to work to enhance your writing skills and try your hand at new voices and techniques:

Flash Sale: $30 off any summer writing class. Discount must be taken at time of registration, cannot be combined with any other offer. Valid while supplies last. Expires 6/12/17. Use coupon code: Facebook17

Today I had a flash fiction piece published in a new online journal, Edify Fiction. It’s called “The Daytime People” and was directly inspired by an afternoon I spent observing people in a fast food restaurant here in Tucson.  You can Read It Here.

The piece  was created for a Writers Studio reading event last fall. My thanks to Renee Bibby and all my friends and colleagues at Writers Studio for providing the inspiration for this piece and the impetus to write it. 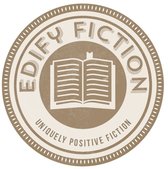 Hope you enjoy the piece, and feel free to leave a comment by clicking on the orange dialogue box to the right of the story title.

If you have fiction, poetry or digital art of a uniquely positive nature, consider submitting it to Edify Fiction.

The Writers Studio is the renowned creative writing program founded in 1987 in New York by Pulitzer Prize winning poet Philip Schulz. With its branches in NYC, San Francisco, Tucson, Hudson Valley as well as its online and “Kids Write” components, Writers Studio has been helping poets and fiction writers reach their potential for 30 years.

Through my work with Writers Studio as a student and now as a teacher, I’ve become more confident at developing strong narrative voices that take command of my creative material. Using effective narrators that help guide the reader through a satisfactory literary experience has helped me  publish multiple short pieces and make progress on a novel, a first draft of which I hope to complete later this year.

I’m proud to be one of the authors featured, with a short fiction piece titled “Probably Last Meeting of the Bluebell Ridge II Homeowners Association.” It was previously published in The Airgonaut.

A celebratory reading will be held in New York on May 6 at the Strand Bookstore to mark the occasion. Wish I could be there, but traveling to NY is not in my budget right now.

The Writers Studio at 30 Anthology should be a great resource for anyone interested in enjoying a smorgasbord of strong narrative voices used in service to poems and stories containing wildly divergent subject matter.

Until May 6, you can pre-order the anthology at a discounted price of $20.

Light to Dark:
Using Mood to Create an Effective Narrator

Join us for an evening of craft and conversation featuring local Tucson writers Donna Aversa, Phil Ivory, and Lilian Vercauteren

This event is free and open to everyone.

The moderated panel discussion will feature these Tucson Literary Luminaries: