It’s hard to believe 20 years have gone by since the release of THE BLAIR WITCH PROJECT (1999). A pioneer in the “found footage” school of horror, this meagerly budgeted independent film directed by Daniel Myrick and Eduardo Sánchez was a huge hit.

Mike is one of three filmmakers who go deep into the Maryland woods to pursue the Blair Witch legend.

Its success was helped by an innovative online marketing campaign, which generated interest in part by suggesting that the film was an actual documentary, and that the three young filmmakers who worked on it had actually gone missing and were the subjects of police investigation.

Of course, none of that was true. THE BLAIR WITCH PROJECT was a total work of fiction, and the filmmakers were played by actors. But the real/unreal confusion created an aura of dread and uncertainty that stirred interest and greatly benefited the film.

In shaky, hand-held footage that was actually shot by the three actors who play the young filmmakers (Heather Donahue, Michael C. Williams, and Joshua Leonard, whose characters bear the same names), we see the trio set out to investigate a local occult legend — the Blair Witch — which is tied to mysterious deaths at different times in the region’s history.

They interview a few locals about the legends, before venturing out into the woods with their video equipment. And that’s when the story really starts.

The woods can be scary, especially when someone leaves weird cult-like stick figures for you to find.

The film plays effectively on the primal fear of being lost in the wilderness.

For that is what quickly happens to the trio. They camp at night only to hear strange sounds in the dark. They march in circles during the day, unable to find their way back to the road and their car.

They bicker. The map disappears, causing a breakdown in morale, which gets even worse when Mike admits that, in a moment of irrationality, he kicked it into the stream.

They discover strange, cult-like stick figures and symbols left in the trees. A warning? Evidently, the three are not alone.

When Josh disappears and the remaining two seem to hear his distant screams at night, it’s clear things have gone from bad to worse.

Soon they are finding bits of human teeth and other grisly tidbits that may or may not belong to Josh.

Heather records an emotional farewell message, apologizing to Mike and Josh for for apparently leading them to their doom.

Mike and Heather are reduced to a child-like state of pure terror, huddling together in the dark.

THE BLAIR WITCH PROJECT is not strong on plot, or on character. If fact, the characters can become grating as they harp at each other, casting blame for their increasingly desperate situation. 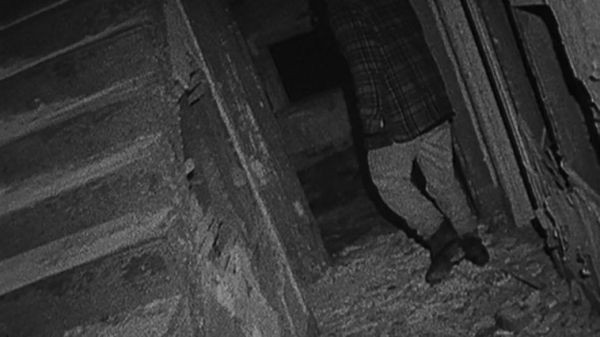 Mike and Heather end up in a deserted house for the chaotic and frightening final sequence.

Still, the film benefits from the “this is really happening” vibe and the sincere performances of the actors, who apparently were genuinely frightened at points during the shooting.

Other films like PARANORMAL ACTIVITY and COVERFIELD found new ways to capitalize on the found footage technique.