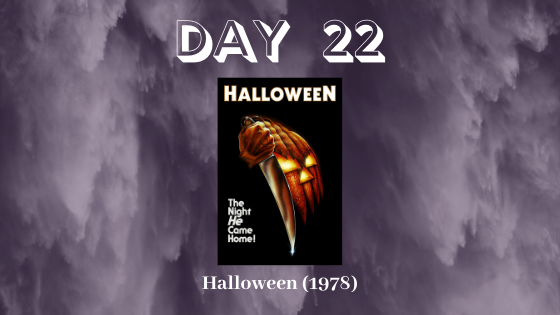 “The Night He Came Home” was the sell line for 1978’s HALLOWEEN, directed by John Carpenter. The “he” was Michael Myers, seen in an effectively eerie subjective camera prologue sequence at age 6 slaughtering his sister with a knife on Halloween night for no discernible reason. (Well, except for one, which we’ll discuss later.)

Six-year-old Michael Myers has killed his own sister.

The adult Michael is a looming, ominously silent figure carrying a knife, wearing a blank-faced mask that makes him the repository of all our primal fears.

Psychological horror? Not so much, since we’re given no past trauma, no motivation whatsoever to justify Michael’s murderous behavior. Is the devil or some other supernatural agency behind it all? We’re given no such indication, although Michael’s psychiatrist, Dr. Loomis (Donald Pleasance) describes the boy Michael as having had “the blackest eyes, the devil’s eyes.”

HALLOWEEN dares to present us with a figure who represents pure evil, a malevolent force that is neither explained or justified.

Part of the pleasure of the film is Carpenter’s depiction of the naturalistic interplay between Laurie and her two friends, Annie (Nancy Loomis) and Lynda (P. J. Soles). (Lynda, for instance, adds “totally” to almost every sentence.) They surreptitiously smoke pot and tease each other about boyfriends, and seem like real friends.

In the film’s setting, Haddonfield, Illinois, Carpenter gives us a peaceful, almost idyllic looking suburban town, with fake leaves imported in during filming, which took play in May. 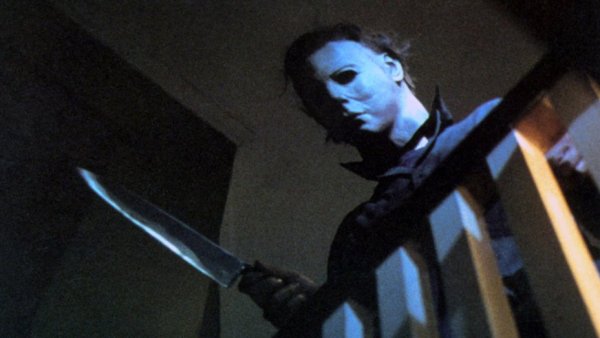 That peace is violated by Michael’s rampage, which is rendered in a series of taut sequences in which characters go about their business unaware that Michael is stalking them. He may not be a supernatural figure, but he has an uncanny ability to fade almost invisibly into the background, and then pop up suddenly to deliver the killing blow. These scenes are staged with minimal blood but considerable Hitchcockian skill by Carpenter.

Are Laurie and Lynda targeted first because both like to get frisky with their boyfriends? That’s the same activity Michael’s teen sister was engaging in when something was triggered and Michael became a murderer for the first time.

Much has been made of this “sex equals death” idea, which was played out ad nauseum in the HALLOWEEN sequels, the FRIDAY THE THIRTEENTH films and other teen slasher movies of the 70s and 80s. (The more recent IT FOLLOWS riffs brilliantly on this familiar horror film trope.)

And yet if that’s the real reason, why does Michael’s primary target seem to be the more modest and chaste Laurie? Will the fact the Laurie is less sexually experienced than the others help assure her survival?

Carpenter himself never had much to say about these ideas, and perhaps to obsess on them is to miss the point. The point being that HALLOWEEN is full of wonderfully scary suspense sequences, punctuated by shocking but not over-the-top gory kill scenes.

The fact that we care about the characters helps give the scare scenes more weight. Curtis’ Laurie Strode is a likable, earnest character, and one who proves surprisingly resourceful and resilient during her final climactic sequence being pursued by Michael. 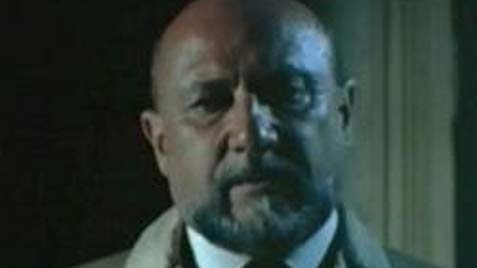 Donald Pleasence is fun in a slightly loopy performance as Loomis, a man so intensely focused on killing Michael that he seems to have forgotten he is Michael’s physician. Lurking in the dark and making goo goo eyes, he’s given to such ripe pronouncements as “He’s gone from here! The evil is gone!”

Carpenter’s minimalist keyboard-based music score is an asset, and the three-note HALLOWEEN main theme is instantly recognizable to any classic horror fan.

Most of the sequels and the sleazy Rob Zombie remake can be safely avoided, although the sequels in which Jamie Lee Curtis returns as star are at least worth a look.

Building upon an interest in all things Satanic set in motion by films such as ROSEMARY’S BABY and THE EXORCIST, and drawing upon the biblical book of Revelations for inspiration, THE OMEN is a chronicle of the birth and early childhood of Damien Thorn.

He’s a chubby-cheeked tot, the doted-upon son of highly born parents, American Ambassador to the UK Robert Thorn (Gregory Peck) and his wife, Katherine (Lee Remick). This child of privilege also happens to be the Anti-Christ. 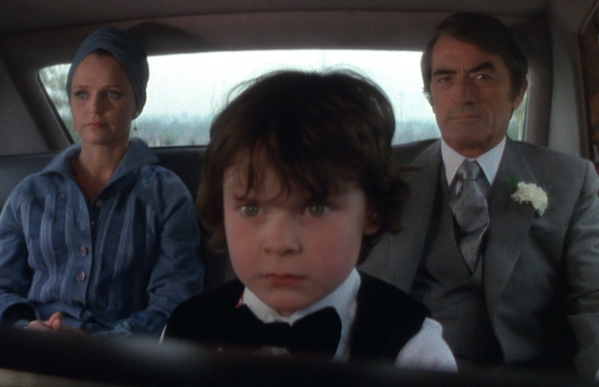 Directed by Richard Donner, THE OMEN is slick, handsomely made, well-appointed with A-list stars and opulent sets. It’s most memorable for the shocking deaths that seem to be supernaturally visited upon anyone in the film who becomes too nosey about who Damien really is. 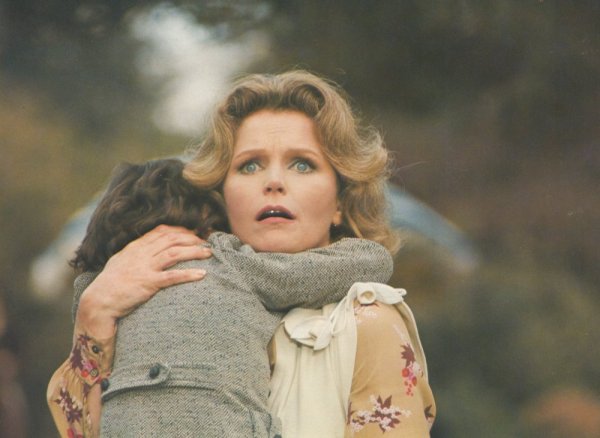 The story’s set in motion when Robert, wishing to spare Katherine sorrow because her pregnancy has resulted in a miscarriage, agrees to a deception suggested by a mysterious priest. A motherless baby will be substituted for the Thorns’ dead child, and Katherine will never be the wiser.

As the baby, Damien, grows into a seemingly happy and healthy child, bizarre deaths happen around him. Damien’s young nanny hangs herself during his fifth birthday party. A new nanny, Mrs. Baylock (Billie Whitelaw), mysteriously appears to take her place. 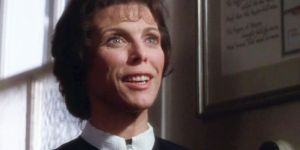 “I am here to protect thee, little one,” says Mrs. Baylock (Billie Whitelaw).

An acolyte of Satan, she’s there to protect Damien so he can grow up and fulfill his destiny, which is outlined neatly in this poem:

When the Jews return to Zion

And a comet rips the sky

And the Holy Roman Empire rises

Then You and I must die.

From the eternal sea he rises,

Creating armies on either shore

Turning man against his brother

‘Til man exists no more.

This poem is recited to Robert by another priest, Father Brennan (Patrick Troughton), who was in on the conspiracy of Damien’s birth. He has repented and wishes to warn Robert. Pretty soon, during a freak storm, a bolt of lightning causes a church spire to fall, impaling Brennan. 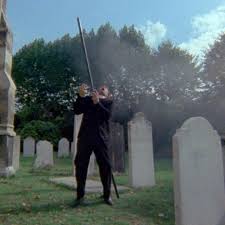 Photographer Keith Jennings (David Warner) also tries to warn Robert, and travels with him to Italy to ferret out the truth about Damien’s unnatural birth.  (Hint: a jackal was involved.)

Jennings succeeds in convincing Robert that Damien is the Antichrist and must be destroyed, but Jennings’ reward is to suffer a horrific death involving a sheet of plate glass that decapitates him.

Robert Thorn is helped in his search for the truth about Damien by Jennings (David Warner.)

Even Damien’s mom, frightened of Damien and unable to love him as her own, comes under attack by the unseen forces that protect the boy, especially when she becomes pregnant with an actual child of Robert and Katherine.

Robert comes into possession of the seven sacred daggers of Meggido, the only weapons that can extinguish the life of the Antichrist. Will he have the nerve to use them? Or will Damien kill him first?

THE OMEN is intriguingly structured as a mystery, as Robert works to discover the truth about his adopted son. The mystery element is lost in the subsequent films, each of which stands as a tableau of unfolding elaborately staged deaths.

For this reason as well as for others, the original installment of THE OMEN remains the best, and well worth discovering.

“I met this six-year-old child, with this blank, pale, emotionless face and, the blackest eyes… the devil’s eyes. “