Every once in a while, a film comes along that is firmly in the tradition of established horror themes while also being completely original. IT FOLLOWS (2014), directed by David Robert Mitchell, is such a film.

Jay (Maika Monroe), a college student, goes on a date with a guy she knows little about, who calls himself Hugh (Jake Weary). They go to a movie but Hugh becomes frightened when Jay tells him she can’t see a girl he’s pointing out to her in the back of the auditorium. They leave and have dinner together.

Later, the two have sex in his car.

Then, shockingly, Hugh chloroforms Jay, and ties her to a wheelchair, taking her to an abandoned building. He doesn’t hurt her, but makes her wait until she sees a woman walking out of the darkness, coming inexorably toward them. Hugh tells Jay to remember what she has seen and believe in it, then takes her away in his car before the woman can reach them.

Jay (Maika Monroe) is initiated into the horrors of IT FOLLOWS.

Hugh explains that by having sex with Jay, he has passed on the curse he received from an earlier sexual tryst. A mysterious figure will keep walking toward Jay until it can reach her and kill her.

No one else will be able to see it. It will take different forms, sometimes as a stranger, sometimes as someone known to Jay, whatever will allow it to get close to her. 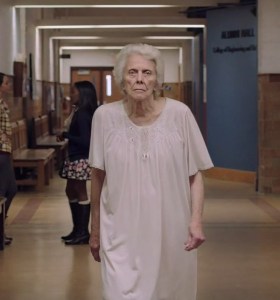 Hugh tells Jay that if it kills her, it will return to seek him out again. That’s why, he insists, she has to pass the curse on to someone else as quickly as possible.

This is the premise of IT FOLLOWS, startlingly simple, haunting and instantly terrifying. The film would seem to draw upon such past “sex equals death” franchises as the HALLOWEEN and FRIDAY THE THIRTEENTH films.

And yet it is original and moody, and follows its own dream logic. It resists easy analysis. Some have described IT FOLLOWS (has any movie had a more witty and fitting title?) as a film about walking STDs, but that seems too simple to me.

Another “sex equals death” teen horror? Or something more?

For once thing, it’s a film about friendship, as Jay turns to her sister, Kelly (Lili Sepe), and friends Paul (Keir Gilchrist), Yara (Olivia Luccardi) and former boyfriend Greg (Daniel Zovatto). They prove to be a resourceful and loyal group, all of whom end up risking their lives for Jay.

Jay’s parents and other adults are mostly absent, unable to help because it would be too much to ask them to believe in the unbelievable.

IT FOLLOWS is in part about growing up in the suburbs, and expresses that sad, lonely aspect of modern life that comes from living so near to other people and yet feeling that, sealed away in their houses, they might as well be a million miles away.

There is a strange timelessness to the film, a deliberate effect on the part of director Mitchell as part of his effort to simulate dream logic. Sometimes IT FOLLOWS feels like it’s set in the 70s or 80s. Other clues point to a more contemporary setting.

Critics almost universally praised the film, although some were less impressed with a climactic sequence in which Jay and her friends try to destroy the evil entity by electrocuting it in a pool.

I think the sequence works well and gives the friends a chance to join together to try to turn the tables on their unstoppable foe. It provides some catharsis before an ending that is, I think of necessity, unresolved.

In the end, what is IT FOLLOWS about? Sex? The heavy mantle of becoming a grownup? The ever-present knowledge of our own mortality, always gnawing at us, coming a little closer every day?

In the film’s opening sequence, we get a glimpse of the aftermath of a visit from the pursuing entity in IT FOLLOWS.

There’s been talk of a sequel. Let’s hope it never happens.

IT FOLLOWS is a modern horror masterpiece, and — let’s just say it — a pretty impossible act to follow. 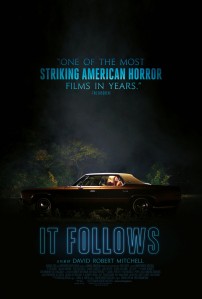