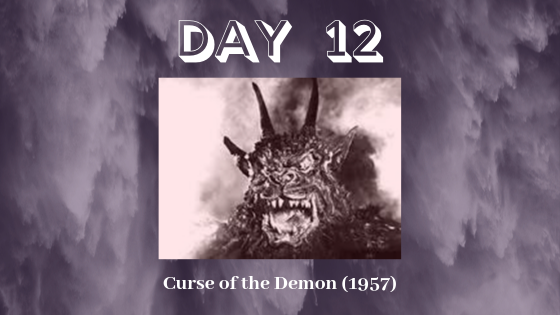 Directed by CAT PEOPLE’s Jacques Tourneur, CURSE OF THE DEMON (also known by its original British title, NIGHT OF THE DEMON), seems to be a spiritual descendant of CAT PEOPLE and other 1940s films produced by the Val Lewton unit at RKO. These were films of shadow, suggestion and mood, rather than ones that served up outright boogeymen.

And so CURSE OF THE DEMON was meant to be, until interference by the producer, over objections of Tourneur and others, resulted in tampering that included inserting special effect shots of a fearsome, King Kong-scale demon, an entity whose malevolence was part of the fabric of the story, but only meant to be hinted at, not literally seen.

Horror aficionados will debate until doomsday whether the demon’s visible presence in the opening and closing scenes enhances or diminishes the story. (I’ll admit I think he’s pretty groovy, in a horrible, medieval demon kind of way.)

This occult tale plays out as a contest of wills between Dr. John Holden (Dana Andrews), a professional skeptic from America who doesn’t believe in the supernatural, and Dr. Julian Karswell (Niall MacGinnis), the film’s real villain and a master of evil occult forces, presumably modeled upon famous British occultist Aleister Crowley. (See my essay on 1934’s THE BLACK CAT, which has Boris Karloff playing another Crowley variation. Crowley would also influence 1973’s THE LEGEND OF HELL HOUSE.)

Niall MacGinnis’s master of black arts, left, is a worthy opponent for the skeptical Dana Andrews in CURSE OF THE DEMON.

Holden, investigating the death of a professor who had been looking into Karswell’s satanic cult, suspects the professor didn’t die a natural death. (In fact, Karswell passed him a cursed parchment, which brought that demon attack seen in the film’s opening.)

Let’s just say that Holden will do fine in the romance department, but his long-held skepticism about the occult will take a beating. His open defiance of Karswell will result in the magician slipping Holden one of those demon-summoning parchments. But who will really get gobbled by the demon in the film’s finale?

It’s great to see that the 1950s era of big-bug horrors like THEM and alien invasion frights like IT CAME FROM OUTER SPACE could still make room for an elegant, occult throwback with literary antecedents like CURSE OF THE DEMON.

“We all go a little mad sometimes.”