These are all horror anthologies, but they stand in the shadow of the granddaddy of them all, DEAD OF NIGHT, produced by England’s Ealing Studios in 1945.

As with many horror anthologies, DEAD OF NIGHT includes a wraparound story. Walter Craig (Mervyn Johns) arrives at a country house, realizing it is the house he’s been seeing in a recurring nightmare that ends with him strangling someone.

Mervyn Johns, center, visits a country house in which everyone has a scary story to tell.

Craig has a sense of deja vu about the house and its guests and residents, who are amused by Craig’s eerie premonitions and begin to share their own stories of the supernatural.

These include a touchingly eerie ghost sighting at a children’s Christmas party; a marriage troubled by the husband’s obsession with an antique mirror that enthralls him with images of murder; a racing car driver who receives a warning in a dream from an ominous hearse driver (“Just room for one inside, sir.”); and a comic relief ghost tale involving the friendship between two golfers. 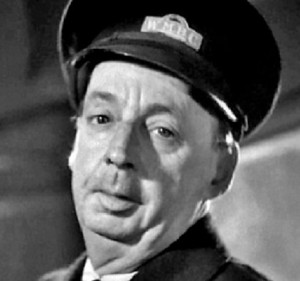 “Just room for one inside, sir.”

But the final, standout story involves an unbalanced ventriloquist, Max Frere (Michael Redgrave), who seems to be increasingly psychologically dominated by his dummy, Hugo.

If you’ve ever wondered where the notion came from that ventriloquist dummies are as scary as hell, well then, meet Hugo!

Hugo begins to mock and demean Max during their act, resulting in a shocking moment in which Max slaps the dummy in front of his alarmed audience. Hugo even makes overtures to another ventriloquist, expressing his wish to abandon Max.

Is Hugo thinking of abandoning his partner and leaving the act?

Max further unravels, until it’s time for a fatal showdown between the two, which leaves Max in an insane asylum with a fractured psyche controlled by … guess who?

Is this a story of multiple personalities, an ancestor of such upcoming classics as PSYCHO? Or is Hugo truly an independent entity in his own right, a doll possessed by a demon, maybe a great uncle of ANNABELLE?

DEAD OF NIGHT has been underappreciated and seen in inferior prints for decades, but recently received blu ray treatment.

The film ends with a whirring nightmare montage that ties the wraparound story together with all the individual tales, including a jarring temporal loop finale that brings us back to the beginning.

Which is a good place to be if you’ve never had the pleasure of watching DEAD OF NIGHT before.