Modern viewers might be surprised by THE MUMMY’s slow pace and the fact that the titular character, played by Boris Karloff, only appears in his familiar shambling, bandaged guise for one scene, before reappearing for the bulk of the film as a sinister, wizened Egyptian scholar. But THE MUMMY, directed by Karl Freund, offers many rewards, achieving a tone of moody, poetic horror that has seldom been matched.

The opening sequence is unforgettable. An enthusiastic young archeologist, played by Bramwell Fletcher, accidentally brings an unearthed mummy, Imhotep, to life by reading aloud a forbidden incantation from an ancient parchment. As the scholar pores over the text, mumbling and deciphering, we get tiny glimpses of the figure in the sarcophagus. A bandaged hand that starts to descend from the chest. An almost imperceptible glint of light in one eye. Freund frames the action carefully so that we see very little and imagine much. 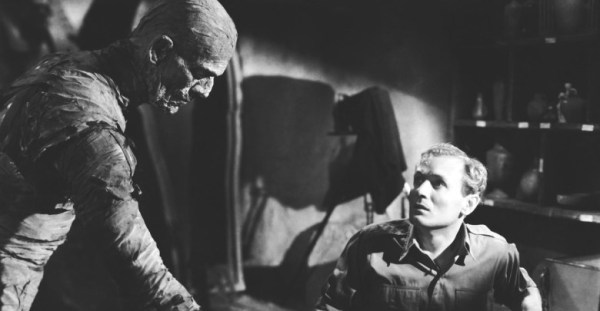 We get a closeup of a dusty, withered hand seizing the parchment as the scholar wheels in horror. His colleagues return to find the mummy and parchment gone and the scholar having gone stark, raving mad, laughing uncontrollably. “He went for a little walk! You should have seen his face!” Outside of Dwight Frye’s Renfield, it’s the most frightening depiction of madness in classic horror.

Cut to years later, and the mummy has reinvented himself as the mysterious Ardath Bey, a strange man who is obsessed with a new expedition to recover the mummy of an ancient Egyptian princess, Ankh-es-en-amon, once the beloved of Imhotep. Bey is astonished to meet Helen Grosvenor, played by Zita Johann, who he believes to be the modern reincarnation of Ankh-es-en-amon. She in turn feels mysteriously drawn to Bey, who has designs to make her an immortal mummy like himself, a process that will required that she submit to a forbidden ritual that will culminate in her death.

Somewhat cut in the mold of Lugosi’s Dracula, Karloff’s Imhotep is a demonic figure who can wield dark Egyptian spells to kill his enemies from afar. What makes him interesting is that he is also a forlorn lover, who has endured great horrors, including burial alive, in the name of his devotion to his long-lost princess. A wonderfully eerie flashback sequence to ancient Egypt shows us the tragic love story, unfolding like a mesmerizing dream from another time.

“Anck-es-en-Amon, my love has lasted longer than the temples of our gods. No man ever suffered as I did for you.”

“You will not remember what I show you now, and yet I shall awaken memories of love… and crime… and death…”